A Fast Way To A Foot Injury 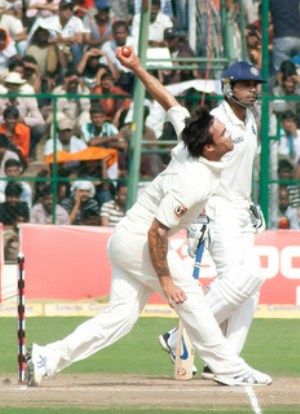 As we head into another Australian summer one sport that dominates the news is cricket.

Cricketers, in particular fast bowlers are very susceptible to foot injuries. This is due to the huge forces placed on a fast bowlers legs. The largest forces are at front foot strike because of the high acceleration when the foot first hits the ground.

The latest Australian fast bowler to be sidelined by a foot injury is the highly promising 18 year old Patrick Cummins. On debut in South Africa in November Cummins collected a 6 wicket haul and man of the match honours. His final figures of 6-79 made him the second youngest player ever to take 6 wickets in an innings.

According to a recent report in the Age, Cummins sustained his foot injury early into the second test against South Africa. By the end of the match Cummins was quite sore and post match scans confirmed heel “fat pad” injury, also known as a bruised heel. A bruised heel is a very disabling condition caused by either an acute incident or repetitive pounding on the heel.

Unfortunately for Cummins his injury woes did not stop there and after consulting a foot specialist further scans also revealed a bone stress injury in the heel. Cummins is not likely to resume bowling until early to mid January 2012.