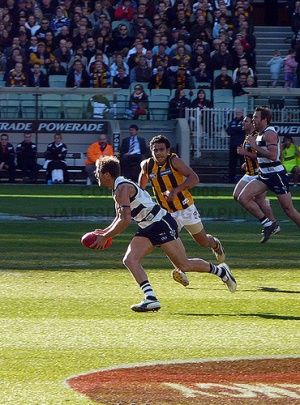 Geelong AFL premiership defender David Wojcinski has suffered a nightmare start to his pre-season with a series of foot injuries that first began in the lead up to Christmas last year.

The Cats assistant coach Nigel Lappin revealed the extent of the injury in a recent Herald-Sun article. “He’s got a couple of different things compacting on top of each other and he’s been going a lot better the last two or three weeks, (but) he’s a work in progress at the moment,” Lappin said.

It is believed the main part of his problem is Plantar Fasciitis, a common foot condition causing pain under the heel and sometimes through the arch of the foot when weight bearing. It is caused by excessive strain of the plantar fascia tendon which can be caused by an acute injury, overuse, poor foot function and other associated problems.

Without appropriate and prompt multifactorial treatment it is a condition that can worsen and become chronic. The article reports that Wojcinski is now back running but a definite return to the game cannot be confirmed. Reports say no earlier than round 6 at this stage.

Plantar Fasciitis has affected a number of elite AFL footballers including Essendon’s James Hird. In 2008 Geelong’s Brad Ottens missed the first 9 rounds of the season with the condition. Most recently West Coast key forward Josh Kennedy is another current AFL player who has been battling the condition during the pre-season.

At Camberwell Road Podiatry we have great experience in treating Plantar Fasciitis so call and make an appointment if you think this may be affecting you.