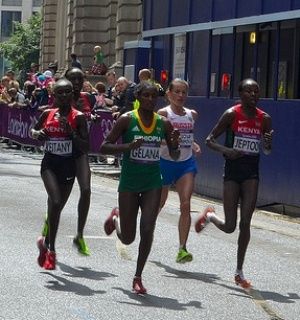 The world’s biggest event, the Olympic Games, are now on in London and there is no tougher event than the grueling 42km of the marathon. But could you imagine running the 42km of London’s streets in bare feet? Ethiopian runner Abebe Bikila became a legend at the 1960 Rome Olympics when he won the gold medal in the men’s marathon running barefoot. Legend has it that when the shoes given to Bikila for the race didn’t fit he decided to ditch them for his bare feet.

What does the research say about barefoot running?

According to an article in ScienceDaily there has been a lot of research on barefoot running but scientists are still divided on whether it causes or prevents injuries. Carey Rothschild, an instructor of physical therapy at the University of Central Florida in Orlando who specializes in orthopedic sports injuries, reviewed the research and found injuries happened with or without shoes.

Research shows that there are risks to running no matter what someone puts on his or her feet. Barefoot runners tend to land more on their forefoot as opposed to the heel and some studies suggest that this causes a higher level of stress fractures on the front part of the foot and increased soreness in the calves. Runners who wear athletic shoes land more on their heel and they too can suffer everything from knee injuries to hip problems, due to the repeated stress from impact forces at heel strike.

There is no perfect recipe

The researcher concludes that barefoot running in and of itself is neither good nor bad. “There is no perfect recipe,” said Rothschild. She suggests getting a thorough physical examination and biomechanical assessment from a physical therapist or other trained professional before considering a transition to bare feet running.

Still confused on which is better for you, then ponder this: Abebe Bikila who won the gold medal barefoot running in Rome 1960 would go on to defend his title four years later in Tokyo. On this occasion he would break the world record but he was now wearing shoes! Whichever running style you choose Camberwell Road Podiatry can help. Our podiatrists can assess your gait and can address any biomechanical faults which will help to make your running more efficient.