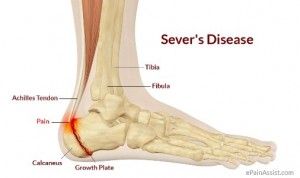 As the anxiety of commencing the schooling year for children subsides and slowly fathoms into the usual routine, one positive association for kids struggling from early school wakeup call is the resumption of children’s sporting commitments, both internal and external to their schools programs. With the resumption of sports in children, similar to any elite athlete, so to resumes the potential for injury. The detection of pain and injuries that may not have been experienced during the ‘lazy’ holiday months may come to fruition as activity levels increase substantially.

These pains and potential ‘injuries’ may in fact not be sudden, in fact many can be growing conditions which may be expected in active children going through their ordinary growth spurts. One such injury that falls in line with both growth spurts and growing conditions is that of Calcaneal Apophysitis, more commonly known as Sever’s Disease.

What is Sever’s disease?

Severs disease is osteochondroses of the calcaneus, or inflammation of the growth plate of the heel bone. It is a fairly common condition in children aged 8-14 presenting with heel pain. It is typically identified in growing children either just prior to or during a significant growth spurt.

Signs and Symptoms of Sever’s disease

What is the cause of Sever’s disease?

Sever’s disease is a result of increased strain on the growth plate of the heel. This is because during growth spurts, bone growth occurs prior to soft tissue (muscles and tendons) growth. However, during growth spurts muscles still grow in strength. This means that the surrounding soft tissue structures may lose flexibility, such as the calf and soleus muscle, Achilles and peroneal tendon and sometimes the plantar fascia.

This decrease in flexibility means that the ankle joint’s ability to move becomes restricted, meaning the heel bone and therefore heel growth plate has to deal with increased pressure and stress. As the calf and Achilles pull on the heel during running and jumping (or any other similar activity) it irritates the growth plate. The growth plate already has increased flow of blood to help build developing new bone. The irritation by the pulling at the back of the bone causes more blood to flow to the area (inflammation) and the result is swelling in the bone producing the pain.

Sever’s disease generally resolves within 2-8 weeks after initiation of therapy. In severe cases, it can be from 6 months up until 1-2 years.

If your child suffers from heel pain (or any other type of foot pain) that sounds like it may correlate with a condition such as Sever’s disease, it is advised to have your child’s feet assessed by one our qualified Mlebourne podiatrists in order to develop a management plan and rehabilitation program. Early therapy can decrease pain and rehabilitation time earlier rather than delaying, and will have your child back to being more active and within a smaller time frame.