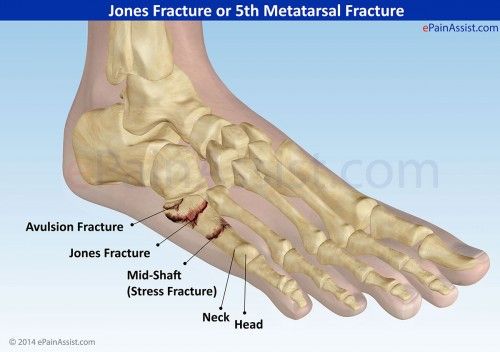 Australian NBA rookie Ben Simmons will miss at least 3 months after sustaining a 5th metatarsal fracture known as a Jones fracture. According to a Forbes article Simmons fractured the bone in his right foot during a training session, a mere four days before he was to play his first pre-season match for the Philadelphia 76ers.

The 76ers’ are doing it tough, with their 4 best players being sidelined for damaging injuries in recent times. Simmons, the number one pick, was being primed to become the offensive instigator for the team. He was a favourite to take out the NBA’s Rookie of the Year and his injury has now thrown the award wide open.

Complications of a Jones fracture

Now you might be thinking, ‘why is he going to be out for so long with a metatarsal fracture?’ A Jones fracture is a little bit more complicated due to the location of the fracture.

Jones’ fractures occur at the intersection between the base and the shaft of the fifth metatarsal. Due to the potential compromised blood supply to this area these fractures are known to have a higher chance of non-union. They are also at higher risk of recurring injury even after healing.

The common mechanism of this injury is inversion type injuries (ankle sprains).  They may also occur from direct or crush injuries to this area.

Treatment of a Jones fracture

If your specialist thinks that the Jones’ fracture will heal without surgical intervention, it is typically treated completely non-weight bearing, with a fibre class cast or CAM walker for six to eight weeks. This is successful for around 75 percent of patients. In these cases which do not require surgery, an additional two to three weeks will be required for rehabilitation.

If you suffer from any non-acute metatarsal fracture or any foot fracture then our Melbourne podiatrists can help. We stock a range of cam-walkers to help immobilise fracture sites and we can also help with rehabilitation from foot fractures. Orthotics or arch supports are often beneficial in the rehabilitation phase as they can help stabilise the 5th metatarsal following removal of the cast. This can help give you a better chance of recovery and may also help to prevent the injury recurring.