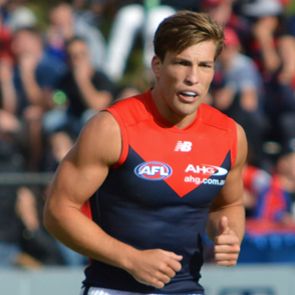 Melbourne co-captain and 2016 best and fairest winner Jack Viney has been sidelined following complications with a very common and chronic foot injury known as plantar fasciitis.

During the first half of Melbourne’s round 15 match, a 6 goal loss against the Sydney Swans, Viney aggravated his injury and was not able to return to the ground after the half time break. At the completion of the game he was taken for scans which revealed the extent of the damage. Subsequently, Viney has had to resort to and has undergone surgery as an attempt to resolve this chronic injury that has clearly interrupted his 2017 season.

As reported in The Age, Josh Mahoney, football manager at Melbourne, when asked about Viney’s injury, noted that it “has been an injury that he has been carrying for the majority of the 2017 season. We expect his recovery from this operation to be approximately 4-6 weeks, based on how quickly his foot can be reloaded post-operation.” It is likely that Melbourne’s co-captain has been trying to manage the injury over the last 4-5 months, with the latest setback likely pushing it to around or beyond the 6 month mark.

What is plantar fasciitis?

Plantar fasciitis is a debilitating condition causing pain under the heel or in the arch on weight-bearing or walking. It is often misdiagnosed and poorly managed.

Plantar fasciitis is caused by excess strain on the plantar fascia, a thick ligament band that runs along the sole of the foot from the heel to the ball of the foot. There are many influential factors and it can affect anyone from “weekend warriors” and recreational exercisers all the way to professional elite athletes. People with high arches or people who spend large amounts of time on their feet are also very commonly affected.

Chronic plantar fasciitis can often be challenging to treat. This just shows that even with elite athletes it can be difficult to manage and treat at the highest level. Resolution time frames can depend on several factors, however if an accurate diagnosis of plantar fasciitis is made early and correct treatment is implemented within the first few weeks from the onset of your first symptoms, some cases may be able to resolve sooner rather than later.

If you feel that you may suffer from plantar fasciitis, we recommend you have it diagnosed as early as possible by one of our Melbourne Podiatrists who can develop a treatment plan to prevent it evolving into a chronic injury.