Growing pains – what causes them in children? 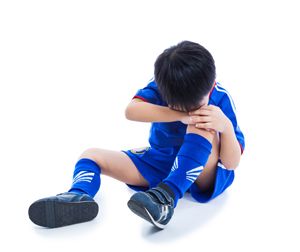 Does your child wake up in the middle of the night crying in pain? Chances are they may be suffering from a common childhood condition known as growing pains.

What are growing pains?

Growing pains are defined as muscle cramps and aches in the lower legs especially in the front of thigh, the calf muscle or behind the knee. They are most common during children’s growth spurt periods between the ages of 3-5 and 8-14 years. Growing pains are more likely to occur later in the day and after a busy day running around or playing sport. Intensity of pain can range from a mild ache to a more severe discomfort that wakes the child at night and causes distress.

There is a lot of conjecture as to what actually causes growing pains and the true cause is mostly unknown. Some feel it may be due to muscle fatigue whilst others feel they mey be related to restless leg syndrome.

Clinically our podiatrists subscribe to the theory that growing pains in the lower legs are most likely the result of muscle fatigue and overuse. This theory also fits in with the cases that we see at our Melbourne clinic. Most growing pain cases we see are pre-school children aged 3-5. During these ages a child’s muscles aren’t fully developed and strong enough to deal with daily loads. The end result is muscle overuse and fatigue resulting in muscular pains and cramps at night.

What children are more at risk of growing pains?

Any condition that leads to muscle overuse and fatigue is more likely to lead to an increased risk of growing pains in a child. This includes:

How can poor foot function play a role in growing pains?

If your child has flat feet or poor foot function then this will cause muscle imbalance in the lower legs. Instead of lower leg muscles working together efficiently some muscles will be under too much strain. For example a flat foot that rolls in or pronates too much will place more strain on those lower leg muscles that are designed to slow down this movement. More strain on certain muscle groups can then in turn lead to fatigue and growing pains, especially in pre-school and underdeveloped children.

What is the treatment for children with growing pains?

Podiatry treatment for growing pains can range from conservative measures such as stretching, massage and heat packs to more advanced treatments like prescription of orthotics.

Orthotics help improve foot function, which in turn helps make the lower leg more stable. The end result is the lower leg muscles work more efficiently with less strain and therefore don’t fatigue as quickly. Clinically our podiatrists find that orthotics can often have a significant impact on reducing the intensity and frequency of growing pains in children with poor foot mechanics.

Don’t ignore growing pains or leg pains in your child

Growing pains or pain in a child’s leg at night should never be ignored as sometimes it may be due to other more serious causes. If you suspect your child may be suffering growing pains or any lower leg pain then it is vitally important you see one of our Melbourne podiatrists for comprehensive diagnosis and treatment.