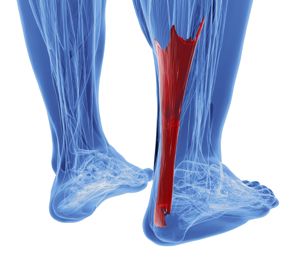 As reported by Fox Sports and Kevin Durant himself via his instagram page, two days later he underwent surgery to repair the tendon. The 30 year old former league MVP is expected to miss the entire 2019-20 season. He had just returned from what was believed to be a calf injury in the same right leg.

What is an Achilles tendon rupture?

The Achilles is the tendon that attached the calf muscles to the back of the heel. A rupture occurs when there is a complete or partial tear of the tendon. This can be the result of an acute incident such as a sudden pivot, jump or acceleration or degeneration of the tendon. An Achilles tendon rupture results in a sharp onset of pain with significant swelling making weight bearing difficult. In some cases athletes may even hear the tendon snap or pop.

How did Durant’s Achilles injury occur?

In Kevin Durant’s case he may have originally hurt his Achilles in Game 5 of the NBA conference semi finals vs the Houston Rockets a month earlier. In the first video below he acts like someone has kicked the back of his leg and he limps off the court unassisted. Whilst the Warriors initially reported this as a calf injury with recent events it is likely that an injury to the Achilles was also involved. This injury forced a month off recovery, only for Durant to return for the finals series against the Toronto Raptors where he ruptures Achilles.

In the second video you can see the moment the devastating Achilles tendon rupture occurs. As Durant pushes of his right foot the injury occurs and he hits the floor clutching the back of his right leg. Durant struggles to weight bear following this injury and has to be assisted off the court. In the third video close up you can actually see the moment the tendon ruptures and recoils.

Our Melbourne sports podiatrists, who are experts in identifying sports injuries of the foot and ankle, can help diagnose and treat Achilles tendinopathy and tendon ruptures. An ultrasound scan may be required if a tear is suspected. In absence of a tear, pain and sometimes swelling in the Achilles is likely to be the result of Achilles tendinopathy.

In cases of a severe or complete Achilles tendon rupture referral for surgery is indicated. A partial tear, depending on severity, in some cases may just require rest and immobilisation in a cast or CAM walker.

At our Melbourne foot clinic we have CAM walkers available for both hire and purchase to help treat less severe Achilles tendon injuries. We can also prescribe orthotics and stretching / strengthening programs to help treat Achilles tendinopathy. So if you are suffering Achilles pain make an appointment with one of our friendly Melbourne sports podiatrists today!